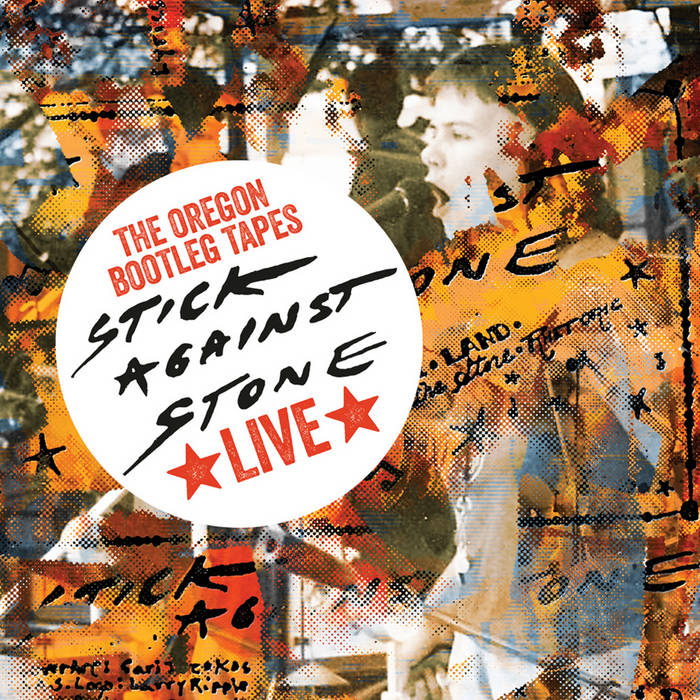 The Oregon Bootleg Tapes (MediaGroove), a long thought lost live set, recorded in the summer of 1985 at Eugene’s outdoor Saturday Market, that captures the raw energy of the five-piece Stick Against Stone collective in full mash-up mode. Sounding like a ‘missing link’ between post-punk, funk, no wave and world music – the set is propelled by versatile founding drummer Richard Vitale and groove-heavy bassist David Soule. Together, the band burns through punk-funk (“Cramphead,” with guitar slinger Daniel Ramirez sounding as angular as Vernon Reid in his Defunkt prime); joyful, mutant ska (“The Hopping Frog,” which mimics its title in the call-and-response between Morninghawk and saxman Robert “Xeres” Shepard); industrial samba infused with dystopian alarm bells and Doppler horns (on “Rhetoric”); no-wave reggae (on the politically charged, Talking Heads-like “Products Throughout the Store”) and a whole lot more. - Bill Murphy (of Time Out New York)

Unless otherwise noted, all songs written by:

Thanks to: Eugene Saturday Market, Oregon Country Fair, CCPA (The WoW Hall), the original Genesis Juice Cooperative, Growers Market, the EMU Ballroom - University of Oregon, KRVM & Paul Sturtz (interviews and airplay), Bob Wenzel, The Eugene Weekly, Danny Meyer, the Church of the Creative, Myles and Trish Swift, Stonehenge co-op, Spud House, Paisley House, Cheeseheads, Om Farm, Reed Banals, Sherry Franklin, Lisa Mischke, Shannon Kelley, Ray Neff, Margo Hellenga, Jay-Bob Hornstein, Uncle Horatio, Keystone Café, The Bagel Bakery, Galleria 909, Buy and Sell Music Center, Mafahali (for capoeira dancing at our shows), Joline Jozokos (for putting up with us), the Vitale Family, MDC, Bad Brains, Trey Gunn, Dot 3, The FARM, Meadow Muffin Jam, all our friends and supporters in Eugene, Pittsburgh, San Francisco, New York and around the world. Gratitude to all the members from each and every version of Stick Against Stone, and thanks also to Will Kreth for pulling this thing off.


Note: The performance audio levels and sound balance varies due to the fact that the camera was hand-held and moving around the audience during the show. Every effort has been taken to work with the material and edit and enhance the best qualities of the sound. That said, there are analog noise artifacts that appear from time to time, due to the nature of the medium and the anomalies introduced by working with a 28 year old live recording. From a freaking camcorder!